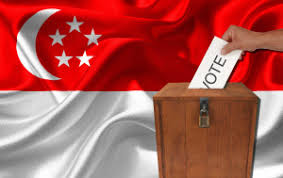 Come 10th July, 2.65 million Singaporeans will be heading to the polling stations to cast their votes in a General Election. They will be choosing a government that will serve the nation for the next 5 years.

Voting is a moral obligation and a sacred duty. It takes great discernment to choose great candidates for the leadership of our country, especially in this uncertain time of global pandemic crisis, chaos and changes.

May our judgments not be made based on charismatic personalities, great speeches and attractive promises.

May we not be swayed by the opinions of friends and the influx of social media that often blurs the lines of truth and falsehood, right and wrong, good and bad.

I asked myself who or which party I would vote for. I felt a tug towards the kind of government I hope to see.

I vote for a strong government, not a weak one that panders to the whims and fancies of the populace. I noticed countries with a “weak” government don’t fare very well in the handling of the pandemic crisis. By “strong” I do not mean the kind that is an autocratic bully who listens to no one, not even the experts. A strong government is one who holds dearly to what they believe are right, sound and good. Their fundamental principles based on true values, reason and fact, are not easily shaken by the cries and clamors of the people.

I vote for a decisive government, not a divisive one that is stymied by differences in views, opinions and approaches. I realized that countries with decisive government did well in stemming the spread of the corona virus. This is not so in countries where partisan fractions slowed, delayed and even objected to the making of an urgent decision. I don’t want a government whose decisive ability is curtailed by the stalemate of a gridlock of opposing views. There can be no progress in such a stagnated arena.

I vote for a gracious government, not a guarded one that has no room for slips, failures, opposing views and dissenting voices. I certainly would not want a government that goes all out to silent those who disagree with their methods and policies. I pray for a government that is open to contrasting ideas and viewpoints.

I vote for a compassionate government, not an unsympathetic one that makes no genuine effort to help those who are trailing behind at the lower end of society. I want a caring government who not only push for progress but also help the marginalized, the needy, the handicapped, the aged, the technologically challenged, even the migrant workers in our midst.

Is all this too much to ask of a government?

Perhaps so, but it is never too much to ask of our God who said, “By Me princes rule, and nobles, all who govern justly” (Proverbs 8:16).

You can be sure of this – I will be praying before I cast my vote.